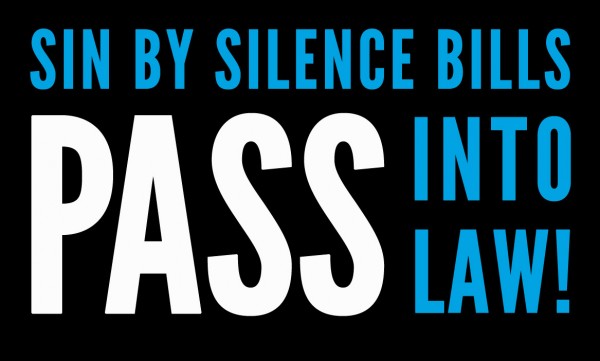 Assemblywoman Fiona Ma’s (D-San Francisco and San Mateo Counties) bills AB 593 and AB 1593 were signed by Governor Edmund Brown Jr. These bills are known as the “Sin by Silence” bills and both will help incarcerated victims of domestic violence.

“I am so proud that Governor Brown has signed both of my bills,” stated Assemblywoman Ma. “Today, we give hope to approximately 7,000 victims across the state who have survived domestic violence, who believed the system had failed them, and will now have an opportunity to speak out against injustice.”

As the chair of the Domestic Violence Select Committee, Assemblywoman Fiona Ma has worked diligently to shed light on the challenges that incarcerated victims of domestic violence experience while in the judicial system. One of the catalysts behind the legislation was Brenda Clubine’s powerful story of struggle, survival and injustice portrayed so vividly through the Sin by Silence film Directed by Olivia Klaus from Quiet Little Place Productions.

In 1983, after eleven restraining orders filed against her husband, and countless visits to the police department and hospital, Clubine hit her husband over the head with a wine bottle while fleeing for her life. Brenda was convicted of second degree murder with a 16 years to life sentence. The judicial system at this time, simply did not understand nor did they take the time, to weigh the substantial history of domestic violence Clubine experienced.

This changed in 1992 when Intimate Partner Battering and its Effects (IPC) also known as Battered Women’s Syndrome, was finally allowed to be introduced and weigh in as evidence in cases where battered women were charged with crimes relating to their experiences of being abused.

Unfortunately, for Clubine and women like her, this law did not apply retroactively and could therefore not be applied to their cases. The change in law only effected the cases of domestic violence victims that were reported after 1996.

As Clubine stated, “When I went to trial, I was only 20 and scared out of my mind. How did I get here? How did this ever happen to me? I never meant to take my husband’s life… I had piles of evidence, reports and paperwork of my abuse to show what lead up to that night of the crime. Yet, it was not allowed to be presented to the jury… even my expert witness was not allowed in the courtroom to testify on my behalf.”

The signing of both AB 593 and AB 1593 will give these women the opportunity to be heard and have another chance at justice.

AB 593 will do two things: it will allow victims of domestic violence whose expert testimony was limited at their trial court proceedings to re-file for a writ of habeas corpus to allow this expert testimony to weigh in on their defense and it will also give victims more time to receive legal representation by deleting the sunset date currently in statute.

AB 1593 will give victims who have suffered Intimate Partner Battering (IPB) a chance to present their evidence in an effective way during the parole process by giving great weight to any information or evidence that proves the prisoner experienced IPB and its effects at the time the crime was committed. This bill will also require that the information delivered to the Legislature relating to IPB, will be in specific and detailed reports.

“The journey to see the Sin By Silence bills become law and set precedence is more than progressive; it’s about righting the injustice of the system for decades on several levels. Working with Assemblywoman Fiona Ma, her amazing staff, the Director of Sin By Silence, and countless others who have been a part of making history is a dream come true for me. Only four years ago I was still in prison, my freedom continuing to elude me after 26 years,” stated Clubine. “In 2008, I was forced to leave my sisters behind and given the honor to continue my advocacy beyond prison walls. I stand proud to be a part of the fight for justice. My life is forever changed by my experiences and it is with heartfelt appreciation I say “thank you” to each person who worked tirelessly to fight against the decades of injustice and give incarcerated survivors a chance. It is with courage, strength and bravery that AB 593 and AB 1593 have now become law.”

“Years ago when I started this journey, I had no idea what change would come through creating Sin by Silence, but I knew I couldn’t give up hope that we could make a difference to help free incarcerated, battered women,” stated Olivia Klaus. “The passing of the Sin by Silence Bills brings together a decade long journey of work to help right the wrong in this world. Now that legislative history has been made in California, we hope to carry on to the rest of the country.”